Evaluating Smart Assistants as a Way to Deliver Better Surveys

Smart assistants such as Alexa, Siri, Google Assistant and Cortana have become commonplace in people’s homes during the last 18 months. Admittedly a lot of their use has centred round playing music and answering trivia questions, but increasingly content is being created that connects them with a broader range of devices and data. They can now control smart home functions, i.e. switch on the coffee maker, change the heating temperature, alter the lighting, open the blinds, etc. They can serve up news or weather alerts and find seating availability at the theatre or a restaurant. Others monitor personal activity, fitness, heart rates and medical conditions; smart assistants are finding their way into many walks of life. But they are not much talked about in market research or insight industries. Their role in the IoT and Big Data insights is quite easy to see from the examples shared, but how could they shape the future of surveys? Could they be used to ask direct market research questions?

Last year I wrote a whitepaper about the use of chatbots for qualitative moderation and my colleague extended it in a blog here, but all of that was focused on written forms of communication. We mainly view surveys in written form these days and most focus is placed on how to make surveys more visually appealing and engaging; for example, our own SurveyMR tool includes ‘drag and drop’ questions, to make completion easier on tablets and smartphones.

However, it’s important to remember that this hasn’t always been the case - just 10-15 years ago the majority of surveys were either conducted via telephone or street interviews. Then, the focus wasn’t on engaging question styles but writing concise and simple text. So turning surveys over to Smart Assistants isn’t as radical as it first appears, rather we’re reverting back to the natural language approach, we’re making them human again in verbal terms, but - with the same cost efficiencies of Internet surveys.

Telephone surveys used to be ‘pushed’ at people via cold-calling techniques. Response rates were surprisingly high and surveys were still 10+ minutes long. And statistically-speaking, surveys could claim greater accuracy because they could follow true random sampling methods. So could Smart Assistant ‘push notification’ surveys bring the same benefits? Consumers could still program their devices to give preferential treatment to particular brand surveys and/or Smart Assistants could easily learn which surveys are of interest to their owner, and when.

At first glance, the idea is quite attractive. As with telephone surveys, the best time to serve them would be after 7pm, after the family evening routine (dinner, children’s bedtime, etc.). However, Smart Assistant surveys would have to be considerably shorter than their telephone equivalent because it was actually the agent who kept us on the call for the 10+ minutes required - they would offer calming and reassuring words and we didn’t feel we could hang up. A Smart Assistant will not be anywhere near as successful in this regard, so both response and completion rates would likely be closer to that of Internet surveys.

Recruited access panels could be a solution to this problem; managing opt-ins and dynamically assigning surveys based on the Smart Assistant’s learning, but we’d lose the random sampling benefit. Perhaps the most successful delivery would be via custom brand panels, where the Smart Assistant could pose questions for feedback in a more natural way than the current online panel surveys.

With surveys needing to be shorter, the Smart Assistant survey would have to be broken down to deliver questions in smaller ‘chunks’ in iterative form, maybe across a number of days. This could erode the barrier between and survey and qual interview slightly, creating more opportunity for back and forth and greater dialogue.

The recruited panel form of these surveys would make this approach even more powerful; able to triangulate the profiled panel data with current and past surveys to give a much richer picture of the individual.

With the ability of Smart Assistants to connect to other devices through the Internet, a more utopian version of surveys opens up, where survey data could combine with other consumption data being fed from alternative user accounts. This would necessitate greater permissions and transparency from the individual and would require the recruited panel route to be achieved. But the goal - the combination of Big Data and feedback questions (both qual and quant) collected in a cost efficient and natural way - is highly desirable.

Smart Assistant usage is on the rise in our homes and while their benefits are still not particularly clear to consumers (beyond fun and music); they are designed to be a more ‘human’ interface for the Internet and connected devices than the screen-based ones we have known until now.

No doubt the future of Internet connectivity will combine screen and speech, but there is something particularly appealing about ‘smart speech’ interaction for market researchers. Ours is a uniquely human industry trying to come to terms with a drive towards the cost-efficient tech world. Smart Assistants have the potential to bridge the gap.

Whilst Smart Assistant technology is still a way away from providing what both we, and the consumer, want here (and the utopian view of combining market research questions with Big Data is even further away) perhaps it’s time we all started imagining going ‘back to the future’ where surveys are concerned… Technology, as we know, moves fast! 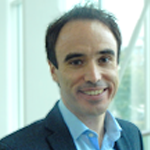 CEO and Founder of FlexMR, Paul has over 20 years of market research experience. As an experienced online researcher, Paul remains active within the insights industry and is dedicated to innovating market research techniques for online application. You can follow Paul on Twitter and connect with him on LinkedIn.