For 12 months at least, AI, machine learning and chatbots have been hot topics in the market research industry. There has been tremendous noise about the use of these innovative technologies for research, whispers that the big qual utopia is finally on the horizon, followed very swiftly by an, ‘erm, if a robot can run a focus group… what will I do?’ panic!

Nowhere however, in all of the articles that I have read has anyone proposed ‘how’ we are actually going to do this, who is going to do this, and when? Excited by the potential here at FlexMR, it wasn’t long before we began delving into the big qual chatbot practicalities, the real world applications that are possible as we sit here today. The resulting concepts are those that I am going to share with you now.

What is a Chatbot?

Many different definitions of a ‘chatbot’ have developed over the years. Indeed, AI itself is often used as a catch all phrase. So in order to understand the proposed uses of chatbots for big qual today it is necessary to re-establish what we mean when we say ‘chatbot’.

A chatbot is a software program that enables people to have a conversation via text, spoken word or both. Essentially, there are two types of chatbots:

1. Rule-Based Chatbots: These work on the basis of fixed questions and answers (predefined rules).

2. 'Smart’ Chatbots: These apply artificial intelligence to learn from their conversations, and so develop to become human-like conversational counterparts (also known as context-based chatbots).

This distinction between chatbot types is important, because their real world capabilities are very different. And in reality, if we are to hit the ground running, it is rule-based chatbots we will be using for big qual - ‘smart’ qual chatbots may be some years in the making, as I will explain.

This big qual chatbot application is nothing particularly new (stay with me, it will get more exciting I promise!), neither is it actually limited to qual. Rather I have included it to demonstrate that many of us are already using the most basic form of rule-based chatbot, perhaps without even realising.

Workflows combined with fixed scripting make this basic research reminder bot. And it is used for one reason and one reason only in market research practice – to automate reminder emails to participants with a view to increasing response rates and freeing research professionals to focus their time on methodology and analysis. Carefully considered email timing and script tone are essential to avoid such automation having the opposite effect on productivity however, i.e. drop-out escalation. And a very simple user interface with pre-populated email templates is required for such a programme to be efficient - Otherwise researchers will spend as much time programming as they would sending manually.

Machine learning may be incorporated into such a solution in terms of data analytics only, i.e. algorithms would ‘learn’ the best time to send reminders and may be applied to A/B email script testing.

To give a little context - Back in April 2016 Mark Zuckerburg announced the launch of the Facebook Messenger chatbot platform amidst great fanfare and suddenly we couldn’t move for branded Facebook chatbots. In truth, most of these are again rule-based and scripted. Not to say that they are not a welcome addition to the world of commerce, indeed their dynamic nature sparked a new era of ‘conversational’ commerce, but the learning curve has been steep.

With even Facebook dialling back their ‘smart’ chatbot API plans (due to a 70% initial failure rate!) the most successful Facebook Messenger ‘bots today are those which operate around a very specific service offering. They use simple Q&A style interfaces, keyword recognition and scripted humour to achieve a goal faster than the alternative digital journeys.

1-800 Flowers lets you order flowers directly from the chatbot within a couple of clicks. Tommy Hilfiger has a distinct brand tone and Poncho (the Weathercat) is downright cheeky!

Facebook Messenger chatbots offer amazing potential for specific research study methods on masse. The talent pool of developers now familiar with the Facebook chatbot API is plentiful and template systems have even developed to support the process.

Focused diary study tasks and open ended journals are perfectly matched to this style of big qual chatbot. Embedded within the Facebook platform your research ‘bot will benefit from the real-time digital connection essential for such studies, as well as access to an extraordinary number of participants, in their own online environments.

Sadly, there are limitations. The Facebook chatbot API requires very specific keyword style answers, it does not process natural language to any discernible degree, nor does it machine learn so whilst you can give the illusion of robotic conversation in real-time, in actuality you will not be able to probe open ended journal entries or diary task responses to any great extent, if at all. That aside, with 1 billion users, what better platform to dip your toe in the water.

For those who own market research software platforms there is an immediate custom development opportunity in the big qual chatbot realm - That of a rule-based chatbot who prompts within an asynchronous, reflective discussion. Without going too far into technical detail we are talking about the timely qualitative data mining of a forum or bulletin board discussion, i.e. on an hourly basis our prompting chatbot would ‘scrape’ the discussion for keywords and sentiment. On finding the right combination within a participant response it would comment or probe.

This enables the basic monitoring of a much larger participant pool. However, such rule-based prompting does not remove the need for a human moderator - far from it! Today’s chatbots have no real ability in terms of collaborative encouragement and continuing a conversation past the initial participant prompt would require natural language processing and verbatim machine learning beyond the scope of AI today.

The prospect of our friendly AI – Amazon Echo’s Alexa – becoming a natural voice processing chatbot interviewer is not as far away as you may think. Alexa already has voice recording functionality. It is fundamental to her operation. As soon as you give her the ‘wake’ command, which is incidentally, ‘Alexa’, she starts recording your voice and this voice recording is then sent to Amazon’s Alexa Voice Services (AVS) via the Internet for voice-to-text command interpretation. Even better, once authorised by Amazon anyone can use their AVS for free to build an Alexa ‘skill’ and therein the big qual market research opportunity lies.

Alexa’s skills are the equivalent of her ‘apps’. At launch Alexa had 135 skills. Now she has 10,000. You will need an accomplished developer to build a custom interview skill for Alexa but it is all within the realms of immediate possibility. The amount you spend will of course dictate the capability of the skill and as such the depth of the big qual captured. Alexa’s big qual reach is also dependent on adoption but nonetheless, in terms of a market research speech chatbot, my money is on her.

Once again, the key to success here is specifics and simplicity. If you ask Alexa if she can pass a Turing test she will say: “I don’t need to pass that, I am not pretending to be human.” Remember that – Despite her apparent competence, she is not a ‘smart’ chatbot. She cannot learn meaning without additional programming so you will have to build a new skill for every new big qual project. Due to the investment required per skill, mini interviews that benefit from repeat conduct may provide the greatest ROI.

In our final application we do make the move into the world of ‘smart’ chatbots (hold on to your hats!) – where there is a very real potential for natural language processing participant email reminders. This concept was inspired by a virtual personal assistant already in existence, Amy Ingram.

Developed by tech start-up x.ai, Amy is a personal meeting scheduler, no more, no less but she does represent one of the major successes in chatbot AI today – she is in massive demand! So much so, there is a waiting list for her. Her deep learning capabilities are that effective and her service that efficient, she has been mistaken for a human (the AI holy grail)… one of her users even sent her flowers.

Amy’s interface is remarkably simple to use, if we were able to adapt such an engaging program for the purpose of participant email reminders we would certainly maximise productivity in terms of response rates for qual (and quant) over and above that of the scripted email reminder chatbot.

I am excited about the possibilities of chatbots in the not too distant future of market research. With a real potential for scaling qual in certain areas, how can you not be but… as a great advocate of the rich, emotive nature of true qual, I would suggest that big qual is currently an addition to the market research toolkit, not a replacement.

As it stands today, machines just aren’t capable of the degree of deep learning and natural language processing required to extrapolate qualitative insight at a human level across an infinite number of topics. The amount of time and money invested in the development of Amy Ingram’s one scheduler function is testament to that.

A human baby has the same complexity as 300 million lines of code (after which it will still require years of training) - Indeed, I would suggest we are at the 'baby' stage of true chatbot moderation. So fear not for your jobs. Rather embrace the possibilities. Adapt your skill sets. The human moderator isn’t going anywhere but the need for a meta-moderator, or 'parent' moderator if you prefer, will soon arise and those who embrace it will no doubt benefit.

I hope you enjoyed this blog. If you have any thoughts on the application of chatbots in big qual do share them below. 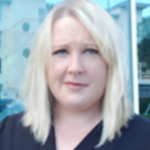 Alison employs an umbrella approach to nurture thought leadership within the FlexMR team, while promoting and developing our experts’ presence within the research industry.